How to stop being a junior – 7 hints of programmer productivity

The cart goes nowhere because the swan wants to fly in the air, the pike wants to swim underwater and the crawfish wants to crawl backward. 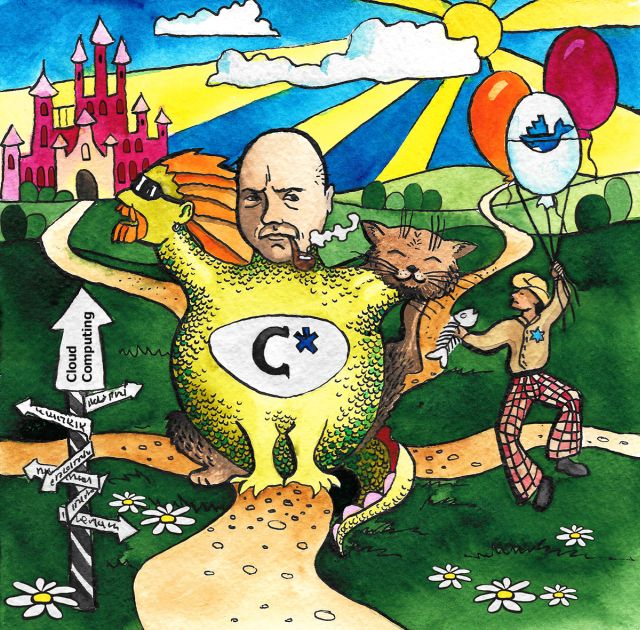 Cassandra is one of powerhorse of modern high load landscape – nosql database that can be pluged to Spark for distributed computing, Titan for playing with graph data representation and even to Elastic as a search backend.
And if you really care about pure write performance – this is de-facto choice in world of open source solutions: production proof, with big community that already generated many outdated controversial answers at SO & mailing lists.

No single point of failure, scalability, high availability, retention periods, … , but those marketing claims hide few principal caveats… Actually, cassandra has only single drawback(*) – it will not reach its limits with default settings on your hardware. Lonely, single node configuration – it is not use case for cassandra, it will shine in multinoded clustered setup.

If you really want to see full utilization of endless cores and crazy amount of RAM, you have to use some virtualisation technology to manage hardware resource.

Let me start first with some conclusions and recommendations, based on extensive two monthes testing and observartion of trouble tickets after migration of this approach to production. With those considerations in mind I was managed to configure it such way to tolerate 750 k mixed operations per seconds. It was generated for more than 8 hours to check pressure tolerance and emulate peak loads. .It was mixed execution of async inserts, without future processing and synced inserts as well as read requests.

Frankly speaking, I am sure it is still far from its limit.

Bear in mind that I am talking about Cassandra 2.1.*.

Cassandra 3.* this is competely another story – in my opinion, mainly, because of storage engine changing, but here is a huge list.

That’s it folks, all craps below is my working notes and bookmarks.

How to get c++11 at Centos7 for stress tool compilation:

How to clean buffer os cache

If you fucked up with partition settings:

If docker info | grep loopback show you something – you already screw up configuration of storage driver.

How to check journal what is happening:

How to check heap memory consumption per node:

How to check what neighbors we can see from nodes:

How to find processes that use swap:

Check how many disk memory we used, from Cassandra perspective

How to open port at centos 7:

or do this, usefull in case network manager behave badly:

And as bonus points –

How to migrate data from old cluster to bright new one

If life was really cruel to you, you can play with data folders per node.

NOTE: if you can replicate exact same setup – in terms of assigned ip, it will be enough to just copy cassandra.yaml from old nodes to new one, and use exact same mapping folder within docker as it were at old cluster.

If not – you still can do it with copying data folder follow steps below, but better just use sstableloader.

NOTE: this is unofficial, not recommended way to deal with data migration.
NOTE 1: it require you to have similar amount of nodes in both clusters
NOTE 2: no need for the same datacenter\rack cfg\ip address

3. Stop new cluster.
within every node data folder of OLD cluster you would have following folders:
system
system_traces
…
NOTE: do not touch system* tables.

4. Under folder /your/cassandra/data-folder/your-keyspace
you should have set of folders corresponding to that keyspace under which data is stored.

6. Migrated node of OLD cluster must be stopped OR you have to use `nodetool drain` for processed node to have all data within sstables ~ data folders.

Articles that I find usefull:

*cassandra has only single drawback – it have no idea of your data model, whether you configure your data schema correctly, what is your load patterns. That why you have to dive in wonderland of controversial recommendations in blogposts like that one instead of thoroughly read documentations first.

P. S. do not believe anyone, measure!